Since their formation in 1983 they have released 12 studio albums, two live albums, and 46 singles.
In October 2005, several radio stations, including CKQB-FM and CHEZ-FM, temporarily stopped playing the song out of sensitivity to the victims of Hurricane Katrina, which had devastated the city of New Orleans in early September

The Tragically Hip - Up to Here 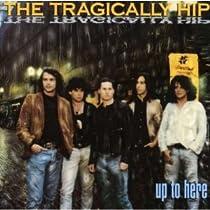