It was touted as a miracle pill: a narcotic pain reliever that could change the lives of people suffering from chronic pain, but with little, so its maker claimed, and thousands of doctors believed  risk of addiction.

Since OxyContin was introduced in 1996, Canada has recorded the second-highest number of prescription opioid painkiller addictions -- and the world's second-highest death rate from overdoses.

So why publish this on a website seamingly used to advocate the benefits medical cannabis?

Largely to save lives. Sudies have been showing that the gateway theory is a myth, and if it does excist, that same 'gate' swing both ways.

Studies now suggest that using cannabis to quit deadly addictions such as OxyContin, (Opiopates) and even fight against alcoholism.

What Are Opioids? Opioids are substances that act on opioid receptors to produce morphine-like effects. Opioids are most often used medically to relieve pain. 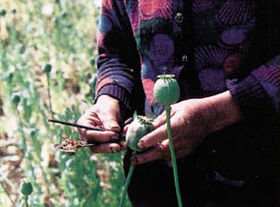 If publishing this video could save only one life, than to me, it outweighs any criticism I may receive for doing it. Puff puff pass.